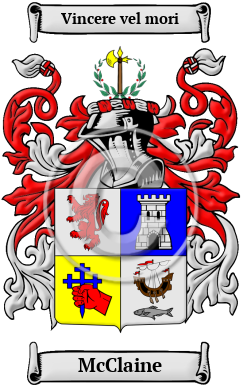 Clan Maclaine of Lochbuie is a branch of the Scottish Clan MacLean. The surname is an Anglicized form of the Gaelic Mac Gille Eathain, a patronymic name meaning "son of the servant of Saint John." The Clan is descended from Eachan Reaganach, (brother of Lachlan the progenitor of the Macleans of Duart). These two brothers were both descended from Gilleathain na Tuaidh, known as 'Gillian of the Battleaxe', a famed warrior of the 5th century. Eachan, or Hector was given the lands of Lochbuie from John, the first Lord of the Isles, some time in the 14th century.

Early Origins of the McClaine family

The surname McClaine was first found in on the Isle of Mull, an island of the Inner Hebrides, off the west coast of Scotland.

Early History of the McClaine family

More information is included under the topic Early McClaine Notables in all our PDF Extended History products and printed products wherever possible.

Migration of the McClaine family