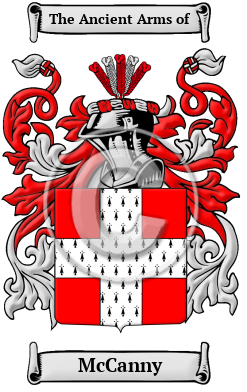 Early Origins of the McCanny family

The surname McCanny was first found in Thomond (Irish: Tuadh Mumhan), what is now County Clare, and in Erris, now County Mayo, where the O Caithniadh family of the Ui Fiachrach Muaidhe were chiefs until the 13th century.

Early History of the McCanny family

This web page shows only a small excerpt of our McCanny research. More information is included under the topic Early McCanny History in all our PDF Extended History products and printed products wherever possible.

Spelling variations of this family name include: Canny, O'Canny, MacCanny and others.

Notable amongst the family name at this time was the MacCanny family of the Castle of Drumbanny, near Limerick. Later the family were of Ballycasey (now Firgrove) in the...
Another 28 words (2 lines of text) are included under the topic Early McCanny Notables in all our PDF Extended History products and printed products wherever possible.

McCanny Settlers in Canada in the 19th Century

McCanny Settlers in Australia in the 19th Century