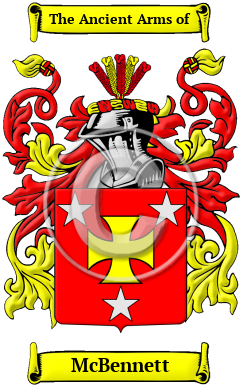 The Strathclyde Briton clans of the Scottish/English Borderlands were the first to use the name McBennett. It is derived from the ancient Latin given name Benedictus, which means blessed.

Early Origins of the McBennett family

The surname McBennett was first found in Perthshire where "Benedictus, son of Walter de Sancto Edmundo, witnessed a charter of sale of land in Perth, 1219. Benedict the dean (decanus) witnessed the gift of the mill of Wystoun to the Hospital of Soltre in 1249. The fame of Saint Benedict (480-543) the patriarch of the Western monks made the name popular. " [1]

Early History of the McBennett family

The variation in the spelling of Medieval names is a result of the lack of spelling rules in the English language prior to the last few hundred years. Before that time, scribes spelled according to sound, often varying the spelling of name within a single document. McBennett has appeared as Bennett, Bennet, Benett, Benet and others.

Notable amongst the family at this time was Sir Thomas Bennett, Sheriff of London in 1594, and Lord Mayor (1603-1604); when he was knighted, he purchased the manor of Beachampton in Berkshire; W. Benett, who was the Mayor of Chester in...
Another 41 words (3 lines of text) are included under the topic Early McBennett Notables in all our PDF Extended History products and printed products wherever possible.

Migration of the McBennett family to Ireland

Some of the McBennett family moved to Ireland, but this topic is not covered in this excerpt.
Another 125 words (9 lines of text) about their life in Ireland is included in all our PDF Extended History products and printed products wherever possible.

McBennett Settlers in Australia in the 19th Century