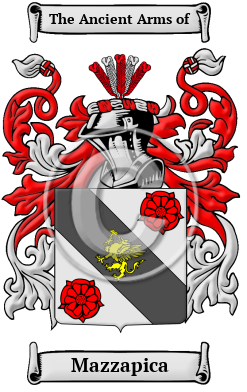 The surname Mazzapica is a common occupational name for a person who was a toolmaker. The occupational surname Mazza is derived from the Italian word mazza, which is translated as a club, hammer, mace or staff of office. The name also exists as one of a number of compound names such as Mazzacane, Mazzagalli, Mazzapica, or Mazzamici.

Early Origins of the Mazzapica family

The surname Mazzapica was first found in Reggio-Emilia, where records can be traced to Lazzaro Mazzoli, Councillor of the State in 1186. Other early records show Blasco Mazza, who was in the Cavalry in Messina in 1287, and later became the Baron of Sellia. The Mazza family of Modena entered into the ranks of nobility in 1306.

Early History of the Mazzapica family

This web page shows only a small excerpt of our Mazzapica research. More information is included under the topic Early Mazzapica History in all our PDF Extended History products and printed products wherever possible.

Italian surnames have a surprising number of forms in comparison with other European surnames because they reflect the regional variations and the many dialects of the Italian language, each of which has its distinctive features. For example, in Northern Italy the most standard Italian surname suffix is "I", whereas in Southern Italy the most typical surname suffix is "O". Sardinian is very different from other forms of Italian and in fact, it is considered to be its own distinct language. Additionally, spelling changes frequently occurred because medieval scribes, church officials, and the bearers of names, spelled names as they sounded rather than according to any specific spelling rules. As a consequence of the major changes in the Italian language and in the local spellings of Italian surnames that occurred over the course of history, there are numerous variations for the surname Mazzapica. These spelling variations include Mazza, Mazzetto, Mazzinghi, Mazzoleni, Mazzarelli, Mazzetti, Mazzino, Mazzini, Mazzola, Mazzoli, Mazzuoli, Mazzoletti, Mazzotta, Mazzotti, Mazzone, Mazzoni, Mazzali, Mazzanti and many more.

Prominent among members of the family was Filippo Mazzola, a famous painter from Parma during the late 15th century. His works can be seen in Padua, Parma, Strasburg, Naples, London, Venice, and Massachusetts. Guido Mazzoni was a famous sculptor from Modena around 1450. He is also known as "Il Paganino," and among his works is a bust of King Ferrante of Naples. Giulio Mazzoni was a famous painter and sculptor in Piacenza during the early 16th century, an was a pupil of Vasari. Marc'Antonio Mazzone was a Venetian musician who wrote 2 books of madrigals during the 16th century. Jacopo di...
Another 170 words (12 lines of text) are included under the topic Early Mazzapica Notables in all our PDF Extended History products and printed products wherever possible.

Migration of the Mazzapica family

The records on immigrants and ships' passengers show a number of people bearing the name Mazzapica: Baldo Mazzarelli, who arrived in Philadelphia in 1866, Concetta and Filomena Mazza, who arrived in New York in 1881 aboard the S.S. Vincenzo Florio from Palermo, Antonio Mazza and Donato Mazzeo, who both sailed on the Orsola, arriving in New York March 8, 1882, as well as Antonio Mazzaro, who was Naturalized in Ashtabula County, Ohio between the years 1875-1906..