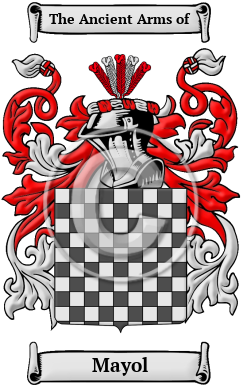 The Mayol name is derived form the Basque word "maiora" which means "heather, moor or heath;" as such it was likely a topographic name for someone who lived near a moor. The surname also comes from a Spanish word "mayor," meaning "head" or "chief" that was an occupational name for the foreman of a gang of agricultural workers or the leader of a group of herdsmen.

Early Origins of the Mayol family

The surname Mayol was first found in Navarre, where they came from the Valley of Baztan.

Early History of the Mayol family

This web page shows only a small excerpt of our Mayol research. Another 31 words (2 lines of text) are included under the topic Early Mayol History in all our PDF Extended History products and printed products wherever possible.

Spelling variations of this family name include: Mayerdomo, Mayoral, Majoral, Mayol and others.

More information is included under the topic Early Mayol Notables in all our PDF Extended History products and printed products wherever possible.

Mayol migration to the United States +

Mayol Settlers in United States in the 16th Century

Mayol Settlers in United States in the 19th Century