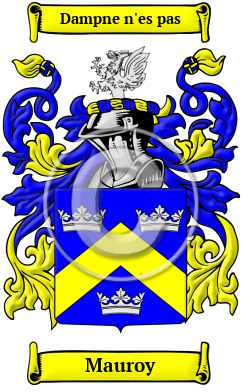 Early Origins of the Mauroy family

The surname Mauroy was first found in Champagne, where the family has been traced to ancient times. Pierre Maury (c.1282-1324) was a shepherd in the Comté de Foix known for his depositions to Bishop Jacques Fournier who was hunting for Cathar heretics. He plays a prominent role in the French historian Emmanuel Le Roy Ladurie's study "Montaillou, village occitan de 1294 à 1324."

Early History of the Mauroy family

More information is included under the topic Early Mauroy Notables in all our PDF Extended History products and printed products wherever possible.

Mauroy migration to the United States +

Mauroy Settlers in United States in the 19th Century