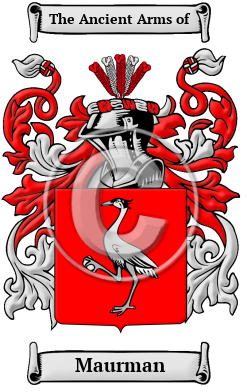 The Maurman surname comes from the German word "mauer," meaning "wall;" as such, the name is thought to have originally been occupational, for a builder of stone walls.

Early Origins of the Maurman family

The surname Maurman was first found in Austria, where the name Maurman became noted for its many branches in the region, each house acquiring a status and influence which was envied by the princes of the region. In their later history the name became a power unto themselves and were elevated to the ranks of nobility as they grew into this most influential family.

Early History of the Maurman family

This web page shows only a small excerpt of our Maurman research. Another 127 words (9 lines of text) covering the years 1677, 1701, 1777, and 1787 are included under the topic Early Maurman History in all our PDF Extended History products and printed products wherever possible.

Many cultural groups lived in the German states in medieval times. Each had its own dialect and traditions, and unique variations of popular names. Low German, which is similar to contemporary Dutch, was spoken in Westphalia. German names are characterized by additions such as regional suffixes and phrases that tell something about the origin or background of its original bearer. Further contributing to the variation in German names was the fact that there were no spelling rules in medieval times: scribes recorded names according to their sound. The recorded spelling variations of Maurman include Maurer, Maurere, Maurers, Maureres, Maurerr, Maurrer, Maurerrs, Maurrers, Maurerre, Maurreres, Maureer, Morer, Moorer and many more.

More information is included under the topic Early Maurman Notables in all our PDF Extended History products and printed products wherever possible.

Migration of the Maurman family

After the First World War, Austria became a republic. The Treaty of Versailles broke up the empire in 1919 and many of the Sudeten Germans were incorporated into the new nation of Czechoslovakia. In the 20th century, many Austrians migrated to other parts of Germany or Europe, as well as to North America. In the United States, the majority of settlers landed in Philadelphia, and moved on to Ohio, Texas, Illinois, California, New York, and Maryland. Many German settlers also migrated to Canada, particularly Ontario and the Prairies. Amongst the settlers in North America with this distinguished name Maurman were Georg Maurer and his wife Apolonia Dorothea Buchi Maurer, who arrived in New York from the Palatinate region in 1710 with their three children, Johann Jakob Maurer and his wife Anna Elisabthe Maurer, who emigrated from Staudernheim to Pennsylvania in 1738 with their daughters Katharina Barbara and Anna Eva, Adam Maurer, who settled in Pennsylvania in 1740 with his wife and their children, and Degmon L. Moorer, who was naturalized in Miami in 1899..