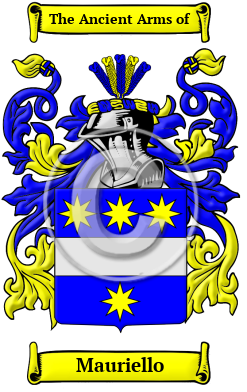 The surname Mauriello came from the personal name Mauro, which is itself derived from the Latin name Maurus.

Early Origins of the Mauriello family

The surname Mauriello was first found in Milan (Italian: Milano, Milanese: Milan), the second-most populous city in Italy and the capital of Lombardy with Gandolfo Maurello, who moved his family to Sicily around 1205.

Early History of the Mauriello family

This web page shows only a small excerpt of our Mauriello research. More information is included under the topic Early Mauriello History in all our PDF Extended History products and printed products wherever possible.

Enormous variation in spelling and form characterizes those Italian names that originated in the medieval era. This is caused by two main factors: regional tradition, and inaccuracies in the recording process. Before the last few hundred years, scribes spelled names according to their sounds. Spelling variations were the unsurprising result. The variations of Mauriello include Mauro, Mauri, Maur, Maura, De Mauro, Di Mauro, Maurich, Mauric, Maurovic, Lo Mauro, Maurello, Mauricio, Maurigi, Mauruzi, Mauriello, Maurelli, Maurel, Maurino, Maurini and many more.

Prominent among bearers of this family in early times was Lico Francesco Mauro, a famous mathematician during the late 15th century from Messina. Nicol Mauruzi was a very famous military Captain who was in command of the Florentine troupes and achieved the greatest victories of the 15th century. Mauro Mauri was a renowned author...
Another 54 words (4 lines of text) are included under the topic Early Mauriello Notables in all our PDF Extended History products and printed products wherever possible.

In the United States, the name Mauriello is the 17,245th most popular surname with an estimated 2,487 people with that name. [1]

Mauriello migration to the United States +

The records on immigrants and ships' passengers show a number of people bearing the name Mauriello:

Mauriello Settlers in United States in the 20th Century