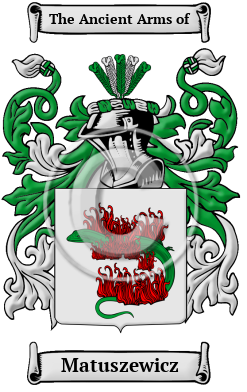 Early Origins of the Matuszewicz family

The surname Matuszewicz was first found in Polesie, the largest province of Poland. It is inhabited by Ruthenians, called Polesians, of Ukrainian descent. The main towns are those of Brest Litovsk, Pinsk, Kobryn, Kamenets, Litovsk, and Luninets. It was in this province that the renowned Radziwills and Sapiehas held their vast estates. The surname became noted for its many branches in the region, each house acquiring a status and influence which was envied by the princes of the region. In their later history the name became a power unto themselves and were elevated to the ranks of nobility as they grew into this most influential family.

Early History of the Matuszewicz family

This web page shows only a small excerpt of our Matuszewicz research. Another 141 words (10 lines of text) covering the years 1476, 1819 and 1410 are included under the topic Early Matuszewicz History in all our PDF Extended History products and printed products wherever possible.

More information is included under the topic Early Matuszewicz Notables in all our PDF Extended History products and printed products wherever possible.

Migration of the Matuszewicz family

Some of the first settlers of this family name or some of its variants were: Antanas Matuszewsky, who sailed from Hamburg to New York in 1872; Florentina and Franciszek Matuszewski, who were both baptized in Baltimore in 1886; Jacob Matuszewski, who was naturalized in Allegheny County, Pennsylvania in 1888.