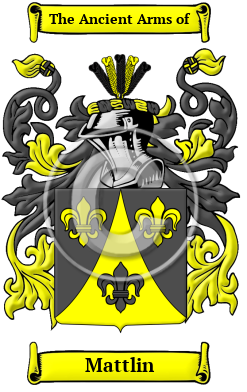 The name Mattlin stems from two sources which were continually mixed up throughout the Middle Ages, so they can no longer be differentiated: one was Matthaeus the Evangelist, who was patron saint of tax collectors, and the other was Mattias (Hebrew for "gift of the gods"), who was one of the twelve Apostles.

Early Origins of the Mattlin family

The surname Mattlin was first found in Prussia, where the family contributed greatly to the development of an emerging nation, and would later play a large role in the tribal and national conflicts of the area. In later years the name branched into many houses, each playing a significant role in local social and political affairs.

Early History of the Mattlin family

Notable figures of the time with the name Mattlin were Johannes Mathesius (1504-65), who was a friend and disciple of Martin Luther. He is the author of the first biography of Luther, and himself wrote hymns and sermons. Johann Mattheson (1681-1764) was a musician and translator and produced the first German imitation of "The Spectator.&quot...
Another 54 words (4 lines of text) are included under the topic Early Mattlin Notables in all our PDF Extended History products and printed products wherever possible.

Migration of the Mattlin family

Some of the first settlers of this family name or some of its variants were: Johan Michael Mattess, who arrived at the port of Philadelphia in 1738; Johan Filp Mattes, who was among the Palatines, who arrived in Philadelphia in 1764 aboard the King of Prussia, Christopher Gotlip Matter, whose Oath of Allegiance was recorded in Pennsylvania in 1729.