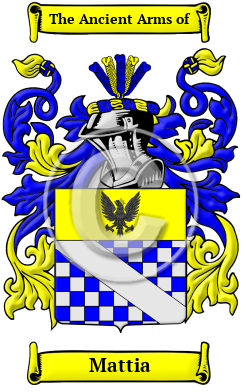 The distinguished surname Mattia can be traced back to the ancient and beautiful region of Piedmont. The most common type of family name found in the region of Piedmont is the patronymic surname, derived from the father's given name. The surname Mattia came from the personal name Matteo, which is the Italian form of the English Matthew. Ultimately, the name was from the Hebrew Matthew the Apostle or Saint Matthew, one of the twelve apostles of Jesus and meant "gift of God."

This name was adopted into Latin as both Matthias and Matthaeus. During the medieval era, the personal name Matteo became popular as people often named their children after popular saints in the hopes that the child would enjoy that saint's patronage in later life.

Early Origins of the Mattia family

The surname Mattia was first found in Abruzzi, a region in central Italy. In those ancient times only persons of rank, the podesta, clergy, city officials, army officers, artists, landowners were entered into the records. To be recorded at this time, at the beginning of recorded history, was of itself a great distinction and indicative of noble ancestry.

Early History of the Mattia family

Prominent among members of the family was Mattiolo Mattioli (died 1480), Italian author, professor of philosophy and medicine; Pietro Andrea Mattioli (1501-1577), Italian herbalist; and Ercole Antonio Mattioli (1640-1694), Italian minister. Lapo Mazzei, was a humanist and public official in Prato in 1350 and Luigi Mattei (died 1675) was an Italian military General and Marquis de Belmonte. Vincenzo Matteucci was a renowned military leader during the 16th century. Nicola Matteis was a prominent violinist, who published 3 books for the violin in 1672 and later went on to teach and perform in London. Antonio Mazzoni was maestro di cappella in Bologna at...
Another 158 words (11 lines of text) are included under the topic Early Mattia Notables in all our PDF Extended History products and printed products wherever possible.

In the United States, the name Mattia is the 17,248th most popular surname with an estimated 2,487 people with that name. [1]

Migration of the Mattia family

Some of the first settlers of this family name or some of its variants were: Jacob Matteis, who arrived in Philadelphia, Pennsylvania, in 1741; Giacomo Mattei and Aynese Matteo, who both arrived on the S.S. Vincenzo Florio from Palermo in New York City in 1881.

Historic Events for the Mattia family +