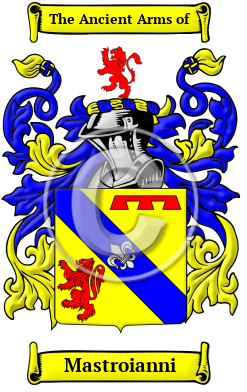 Early Origins of the Mastroianni family

The surname Mastroianni was first found in Italy. Mastroianni is mentioned in early documents all over Italy, as the surname Mastro, or Maestro, is only part of other Italian names. It was not until they emigrated, that families bearing names such as Mastr-antonio, Mastrogiovanni, and others, had their names shortened to Mastroianni. This was especially prevalent in North American immigration.

Early History of the Mastroianni family

This web page shows only a small excerpt of our Mastroianni research. Another 36 words (3 lines of text) are included under the topic Early Mastroianni History in all our PDF Extended History products and printed products wherever possible.

Spelling variations of this family name include: Mastro, Maestro, Mastrilli, Mastrillo, Mastroianni, Mastrino and many more.

More information is included under the topic Early Mastroianni Notables in all our PDF Extended History products and printed products wherever possible.

Mastroianni migration to the United States +

Mastroianni Settlers in United States in the 20th Century