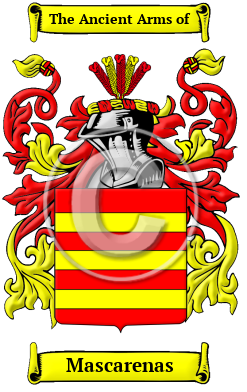 The Mascarenas name is a habitational name taken on from any of several towns called Mascarenhas in Portugal. This name branched to Spain, and interestingly, is also found in India, where it was taken by Portuguese colonists.

Early Origins of the Mascarenas family

The surname Mascarenas was first found in the district of Mirandela in the northwest of Portugal. The progenitor of the Mascarenas family is said to have been Estevao Rodrigues, who was Lord of Mascarenhas, who served King Sancho I of Portugal (1185-1211).

Early History of the Mascarenas family

Spelling variations of this family name include: Mascarenaz, Mascarenhas, Mascarenas and others.

Prominent members of the family include D. Pedro Mascarenhas (1470-1555), a Portuguese explorer and colonial administrator, the first European to discover the island of Diego Garcia in the Indian Ocean in 1512, Captain-Major of the Portuguese Malacca from 1525...
Another 39 words (3 lines of text) are included under the topic Early Mascarenas Notables in all our PDF Extended History products and printed products wherever possible.

In the United States, the name Mascarenas is the 7,474th most popular surname with an estimated 4,974 people with that name. [1]

Mascarenas migration to the United States +

Mascarenas Settlers in United States in the 19th Century

Mascarenas Settlers in United States in the 20th Century