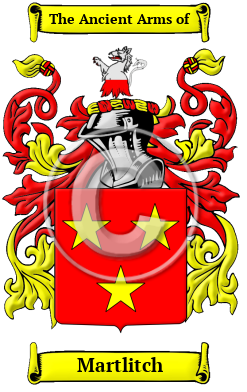 Early Origins of the Martlitch family

The surname Martlitch was first found in Derbyshire, at Matlock, a parish, in the union of Bakewell, hundred of Wirksworth. "This place, which was formerly called Mesterford or Metesford, is equally celebrated for the beauty of its scenery, and the purity of its medicinal springs, and consists at present of the village and the baths, nearly a mile and a half distant from each other. The waters were first applied to medicinal uses about the end of the seventeenth century." [1]

Early History of the Martlitch family

This web page shows only a small excerpt of our Martlitch research. Another 61 words (4 lines of text) covering the years 108 and 1086 are included under the topic Early Martlitch History in all our PDF Extended History products and printed products wherever possible.

More information is included under the topic Early Martlitch Notables in all our PDF Extended History products and printed products wherever possible.

Migration of the Martlitch family