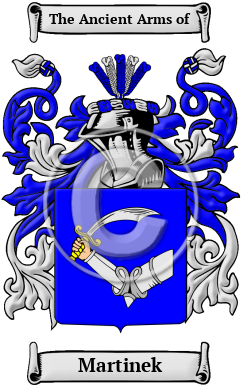 The distinguished Czech surname Martinek is composed of two elements: "Martin," derived from the Latin "Martinus," and the characteristic suffix "-ek," indicating "son of." Thus, the surname Martinek indicates "a son of Martin."

Early Origins of the Martinek family

The surname Martinek was first found in Bohemia, where the name is thought to have emerged. It was likely first borne by a son of someone named Martin during the Middle Ages, when hereditary surnames were first beginning to emerge in the region. The young Martinek family was instrumental during this turbulent period, figuring prominently in the early history of the region and contributing greatly to the development of medieval Bohemian society.

Early History of the Martinek family

This web page shows only a small excerpt of our Martinek research. Another 137 words (10 lines of text) covering the years 1793, 1795, 1865, 1683, 1724 and 1836 are included under the topic Early Martinek History in all our PDF Extended History products and printed products wherever possible.

Spelling variations of this family name include: Martinek, Martinec, Martunka, Martineck and others.

Another 30 words (2 lines of text) are included under the topic Early Martinek Notables in all our PDF Extended History products and printed products wherever possible.

In the United States, the name Martinek is the 16,091st most popular surname with an estimated 2,487 people with that name. [1]

Martinek migration to the United States +

Martinek Settlers in United States in the 19th Century