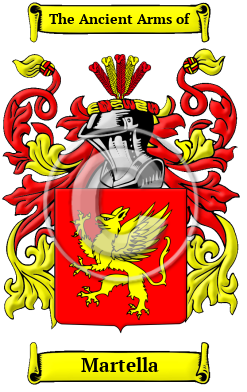 A variety of distinguished and notable names have emerged from the beautiful and historical Italian region of Tuscany, including the notable surname Martella. During the Middle Ages, as populations grew and travel between regions became more frequent, the people of Tuscany, who were originally known only by a single name, found it necessary to adopt a second name to identify themselves and their families. This process of adopting fixed hereditary surnames in Italy began in the 10th and 11th centuries, but it was not completed until the modern era. The development of Italian hereditary surnames followed general principles and were characterized by derivatives from one's given name. The patronymic surname, which is derived from the father's given name, was one of the most common name types found in the region of Tuscany. This system of name-making was widely used because it linked well with the existing Feudal System and during the Christian era, many people named their children after saints and biblical figures. The surname Martella came from the Latin name Martinus, which is a derivative of Mars, who was the Roman god of fertility and war. The popularity of the name Martin is due to Saint Martin de Tours, who was one of the best known saints in the Western World. With the spread of Christianity, people named their children after saints in the hope that the children might enjoy that saint's patronage. Martin is also one of the few saints' names, other than the names of Old English saints, found in England before the Norman Conquest. The name Martelli is a diminutive of the name Martin, but it is also of occupational origin. The occupational name Martelli is derived from the Italian wordmartello meaning hammer, and it referred to a person who was a carpenter or one who worked with a hammer.

Early Origins of the Martella family

The surname Martella was first found in Florence (Italian: Firenze), with Giovanni di Guglielmo Martelli, who moved with his family to Verona in 1333, where he became a lawyer. Martello towers (or simply Martellos) are small defensive forts built based on a design at Mortella (Myrtle) Point in Corsica. Two British warships, HMS Fortitude (74 guns) and HMS Juno (32 guns) in 1794 unsuccessfully attacked the tower at Mortella Point. Accordingly, the British adapted the fort's design to build over 70 such towers throughout the British Commonwealth.

Early History of the Martella family

This web page shows only a small excerpt of our Martella research. More information is included under the topic Early Martella History in all our PDF Extended History products and printed products wherever possible.

Italian surnames have a surprising number of forms in comparison with other European surnames because they reflect the regional variations and the many dialects of the Italian language, each of which has its distinctive features. For example, in Northern Italy the most standard Italian surname suffix is "I", whereas in Southern Italy the most typical surname suffix is "O". Sardinian is very different from other forms of Italian and in fact, it is considered to be its own distinct language. Additionally, spelling changes frequently occurred because medieval scribes, church officials, and the bearers of names, spelled names as they sounded rather than according to any specific spelling rules. As a consequence of the major changes in the Italian language and in the local spellings of Italian surnames that occurred over the course of history, there are numerous variations for the surname Martella. These spelling variations include Martelli, Martello, Martiello, Martella, Martela, Martellini, Martellino, Martellina, Martellotti, Martellotto, Martellotta, Martelloni, Martellani and many more.

Prominent among members of the family was Ugolino Martelli, a silk manufacturer in Florence during the 14th century; of this family came 40 priests. Bernardo Martellini was Bishop of Cesena during the 14th century; The famous Monsignor Francesco Martello, Bishop of Reggio in the 16th century, is of this lineage. Ludovico Martelli was a...
Another 54 words (4 lines of text) are included under the topic Early Martella Notables in all our PDF Extended History products and printed products wherever possible.

Martella migration to the United States +

Martella Settlers in United States in the 19th Century