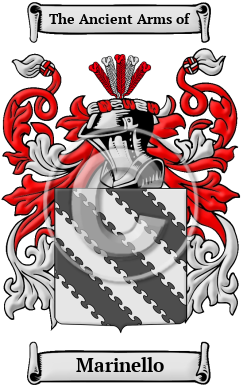 The distinguished surname Marinello originated in an area of Italy, known as the Papal States. Although people were originally known only by a single name, it became necessary for people to adapt a second name to identify themselves as populations grew and travel became more frequent. The process of adopting fixed hereditary surnames was not complete until the modern era, but the use of hereditary family names in Italy began in the 10th and 11th centuries. Italian hereditary surnames were developed according to fairly general principles and they are characterized by a profusion of derivatives coined from given names. The most traditional type of family name found in the region of the Papal States is the patronymic surname, which is derived from the father's given name. During the Middle Ages, Italians adopted the patronymic system of name-making because it perfectly complemented the prevailing Feudal System. In Italy the popularity of patronymic type of surname is also due to the fact that during the Christian era, people often named their children after saints and biblical figures. The surname Marinello came from the name Marino, which is further derived from the Latin Marinus, which means of the sea. During the Middle Ages, parents frequently named their children after saints in the hopes of obtaining the grace and protection of the invoked saint for the child. The name Marino became popular because of devotion to several saints, including Saint Marino the Bishop of Rimini and Saint Marino who, according to tradition, founded the first Christian community on Mount Titano and from whom the Republic of San Marino takes its name. Alternatively, the surname Marini is of local origin, derived from the place named Marino, which is situated near Rome.

Early Origins of the Marinello family

The surname Marinello was first found in Orvieto, a small city which lies southwest of Perugia, where Ugolino Marini was consul for the town in 1068.

Early History of the Marinello family

In comparison with other European surnames, Italian surnames have a surprising number of forms. They reflect the regional variations and the many dialects of the Italian language, each with its own distinctive features. For example, in Northern Italy the typical Italian surname suffix is "i", whereas in Southern Italy it is "o". Additionally, spelling changes frequently occurred because medieval scribes and church officials often spelled names as they sounded rather than according to any specific spelling rules. The spelling variations in the name Marinello include DeMarini, DeMarinis, LaMarina, Marinacci, Marinaccio, Marinato, Marinazzo, Marinella, Marin, Marinetti, Marini, Mariniello, Marino, Marinolli, Marinoni, Marinotti, Marinotto, Marinucci, Marinuzzi and many more.

Prominent among members of the family was Lucrezia Marinella (c.1571-1653), an Italian author; Onorio Marinari (1627-1715), an Italian painter and printmaker of the Baroque period; and Giambattista Marino (1569-1625), better known as Il Cavaliere Marino, a poet and...
Another 38 words (3 lines of text) are included under the topic Early Marinello Notables in all our PDF Extended History products and printed products wherever possible.

In the United States, the name Marinello is the 18,103rd most popular surname with an estimated 2,487 people with that name. [1]

Migration of the Marinello family

Analysis of immigration records indicates that some of the first North American immigrants bore the name Marinello or a variant listed above: Pietro Marini came to San Francisco, California in 1850; Giovanni Marino, Gio Marini, Felice Marino, Francesco Marino, and Michele Marino all arrived in Allegheny County in Pennsylvania around the turn of the century.