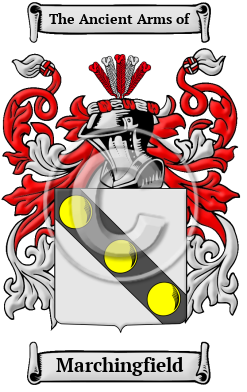 Early Origins of the Marchingfield family

The surname Marchingfield was first found in Yorkshire at Markington, a village in the Harrogate district which dates back to at least the Domesday Book where it was listed as Merchinton. The place name may have been derived from the Old English word Merce + tun, combined to mean "farmstead of the Mercians." Alternatively, the place name could have meant "farmstead of the boundary-dwellers." [1]

Early History of the Marchingfield family

This web page shows only a small excerpt of our Marchingfield research. Another 104 words (7 lines of text) covering the years 1510, 1600, 1415, 1420, 1398 and 1513 are included under the topic Early Marchingfield History in all our PDF Extended History products and printed products wherever possible.

Another 47 words (3 lines of text) are included under the topic Early Marchingfield Notables in all our PDF Extended History products and printed products wherever possible.

Migration of the Marchingfield family