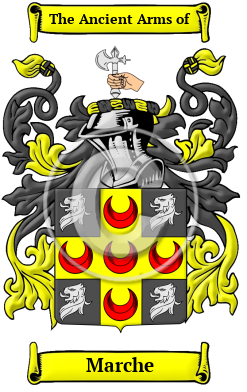 The history of the Marche family name begins after the Norman Conquest of 1066. They lived on the border between two territories, such as the Marches between England and Wales or on the English Scottish borders. The name may also have emerged as a nickname for someone born in the month of March.

Early Origins of the Marche family

The surname Marche was first found in Cambridgeshire at March, a market town and civil parish in the Isle of Ely area in the parish of Doddington, union and hundred of North Witchford. The town lies on the course of the Fen Causeway, a Roman road, and there is evidence of Roman settlements in the area. "Between this town and Wisbech, urns inclosing burnt bones, and a vessel containing 160 Roman denarii of different emperors, were discovered in the year 1730." [1] Listed in the Domesday Book of 1086 as Merche [2], it derives its name from the Old English word "mearc." [3] The Hundredorum Rolls of 1273 list: Henry le March and William le March, both in Cambridgeshire; and Philip le march in Oxfordshire. The Yorkshire Poll Tax Rolls of 1379 list: Johannes de la Marche; Ricardus del Marche; and Agnes del Marche. [4] William de la Marche was listed in Cheshire in 1295. [5]

Early History of the Marche family

Anglo-Norman names are characterized by a multitude of spelling variations. When the Normans became the ruling people of England in the 11th century, they introduced a new language into a society where the main languages of Old and later Middle English had no definite spelling rules. These languages were more often spoken than written, so they blended freely with one another. Contributing to this mixing of tongues was the fact that medieval scribes spelled words according to sound, ensuring that a person's name would appear differently in nearly every document in which it was recorded. The name has been spelled March, Marche and others.

Outstanding amongst the family at this time was Pere March (1336/1338-1413), a Valencian poet, family had been lawyers and officers of the court of the kingdom of Aragon, undertook several important diplomatic missions, traveling to England for the first Alfonso twice in the...
Another 43 words (3 lines of text) are included under the topic Early Marche Notables in all our PDF Extended History products and printed products wherever possible.

Marche migration to the United States +

For many English families, the political and religious disarray that plagued their homeland made the frontiers of the New World an attractive prospect. Thousands migrated, aboard cramped disease-ridden ships. They arrived sick, poor, and hungry, but were welcomed in many cases with far greater opportunity than at home in England. Many of these hardy settlers went on to make important contributions to the emerging nations in which they landed. Among early immigrants bearing the name Marche or a variant listed above were:

Marche Settlers in United States in the 17th Century

Marche Settlers in United States in the 19th Century