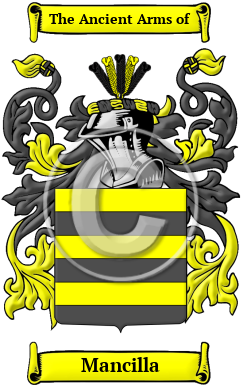 From the historical and enchanting Italian region of Tuscany emerged a multitude of noble families, including the distinguished Mancilla family. During the Middle Ages, as populations grew and travel between regions became more frequent, the people of Tuscany found it necessary to adopt a second name to identify themselves and their families. The process of adopting fixed hereditary surnames was not complete until the modern era, but the use of hereditary family names in Italy began in the 10th and 11th centuries. Italian hereditary surnames were developed according to fairly general principles and they were characterized by a profusion of derivatives coined from given names. Although the most common type of family name found in Tuscany is the patronymic surname, which is derived from the father's given name, the nickname type of surname is also frequently found. Nickname surnames were derived from an eke-name, or added name. They usually reflected the physical characteristics or attributes of the first person that used the name. The surname Mancilla is a name for a person who was equally adept and skilled in the use of both hands. The name Mancini is derived from the Italian word mancino, which means one who is ambidextrous.

Early Origins of the Mancilla family

The surname Mancilla was first found in Florence (Italian: Firenze), where the main branch of the family originates. Leonardo Mancini, was a bishop in Orvieto in 1295. Also noteworthy is Daccino Mancini, who was the ambassador to the Sicilian King in 1406 and then to the Pope in 1408. Around the same period, Giuseppe Mancini was the Archbishop of Siena, and about 400 years later, another Archbishop, this time of Cosenza, was Domenico Mancinelli. The Mancinelli family is known for being one of the oldest families in the city of Narni in the region of Umbria.

Early History of the Mancilla family

Surnames that originated in Italy are characterized by an enormous number of spelling variations. Some of these are derived from regional traditions and dialects. Northern names, for instance, often end in "o", while southern names tend to end in "i". Other variations come from the fact the medieval scribes tended to spell according to the sound of words, rather than any particular set of rules. The recorded variations of Mancilla include Mancin, Mancina, Mancinelli, Mancinetti, Mancino and many more.

Prominent among members of the family was Antonio Mancinelli (1452-1505), a humanist pedagogue, grammarian, and rhetorician; Laure served brilliantly in the armies of Louis XIV, Marie was the wife of the Duc di Bouillon and patroness of men of letters such as LaFontaine, Corneille and Moliére; Hortense was the wife of Marquis di la Meilleraye, and a favorite of King Charles II of England; Giulio Mancini (1558-1630) was a noted physician...
Another 70 words (5 lines of text) are included under the topic Early Mancilla Notables in all our PDF Extended History products and printed products wherever possible.

In the United States, the name Mancilla is the 9,936th most popular surname with an estimated 2,487 people with that name. [1]

Migration of the Mancilla family

In the immigration and passenger lists were a number of people bearing the name Mancilla Antonio and Michael Mancini, who arrived in Indiana in 1896.