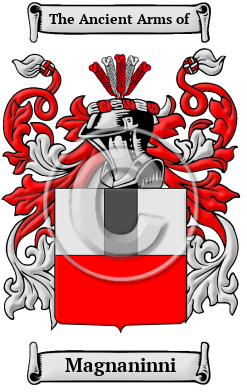 The Magnaninni surname has at least two possible derivations. The Italian word "magnano" means "blacksmith" or "locksmith," and no doubt in some instances, this surname was of occupational origin. There are also several places in Italy called Magnano or Magnani and the surname was also likely taken on from some of these place names.

Early Origins of the Magnaninni family

The surname Magnaninni was first found in Bolgna (Latin: Bononia), the largest city and the capital of Emilia-Romagna Region. Early record show that a bearer of Magnani was a government magistrate in 1223. In those ancient times only persons of rank, the podesta, clergy, city officials, army officers, artists, landowners were entered into the records. To be recorded at this time was in itself a family honor.

Early History of the Magnaninni family

This web page shows only a small excerpt of our Magnaninni research. Another 83 words (6 lines of text) covering the years 1442, 1422, 1571, 1653 and 1797 are included under the topic Early Magnaninni History in all our PDF Extended History products and printed products wherever possible.

Another 36 words (3 lines of text) are included under the topic Early Magnaninni Notables in all our PDF Extended History products and printed products wherever possible.

Migration of the Magnaninni family