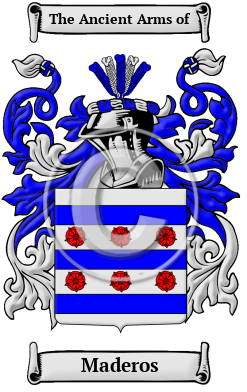 Early Origins of the Maderos family

The surname Maderos was first found in Aragon an ancient Kingdom of Spain closely linked to the early history of England.

Early History of the Maderos family

This web page shows only a small excerpt of our Maderos research. Another 68 words (5 lines of text) are included under the topic Early Maderos History in all our PDF Extended History products and printed products wherever possible.

Spelling variations of this family name include: Mederos, Madieres, Mederos, Maderos, Materos and others.

More information is included under the topic Early Maderos Notables in all our PDF Extended History products and printed products wherever possible.

Migration of the Maderos family

Some of the first settlers of this family name or some of its variants were: Bartolome Maduro, who arrived in Rio de la Plata in 1535. In later years, came Julio F. Medeiros, who was naturalized in Ashtabula Co., Ohio sometime between 1875 and 1906.