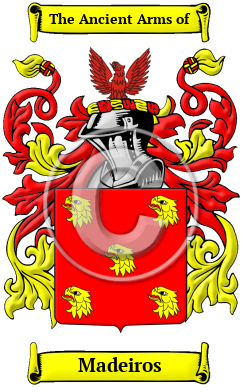 The name Madeiros is derived from the Portuguese word, "medeiro," meaning "a place where shocks of maize are gathered." There are several places in Portugal that bear that name, and, in turn, people assumed that name in a number of places in the country.

Early Origins of the Madeiros family

The surname Madeiros was first found in one of the places named Medeiros in Portugal.

Early History of the Madeiros family

This web page shows only a small excerpt of our Madeiros research. Another 33 words (2 lines of text) covering the years 124 and 1245 are included under the topic Early Madeiros History in all our PDF Extended History products and printed products wherever possible.

Spelling variations of this family name include: Medeiros, Madeiros, Medas. and others.

Prominent members of the family include Martim Sanches das Medas, who lived in the mid-13th century. He is known to have fought under King Afonso III at the Battle of Porto in 1245...
Another 33 words (2 lines of text) are included under the topic Early Madeiros Notables in all our PDF Extended History products and printed products wherever possible.

Migration of the Madeiros family

Some of the first settlers of this family name or some of its variants were: Julio F. Medeiros, who was naturalized in Ashtabula Co. Ohio sometime between 1875 and 1906; Marianno Medeiros, who came to New York, NY in 1893.