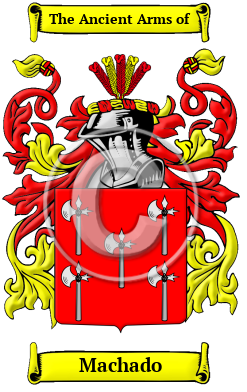 The Machado surname comes from the Portuguese word "machado," which means "axe." Family legend has it that in Medieval Portugal in 1147, after the Moors had taken the castle at Santarem, the Portuguese attacked the castle. Mendo Moniz and his two sons Pedro and Nono Mendes beat down the door with their hatchets and were the first to enter the besieged castle. In honor of the valiant deed, one of Pedro's sons, Martim Pires, was called "Machado" as a nickname, which was then taken on as the family surname. Martim lived during the reign of Alfonso II (1152-96), and was married to Maria Moniz.

Early Origins of the Machado family

The surname Machado was first found in Portugal.

Early History of the Machado family

This web page shows only a small excerpt of our Machado research. More information is included under the topic Early Machado History in all our PDF Extended History products and printed products wherever possible.

Spelling variations of this family name include: Machado, Machados and others.

More information is included under the topic Early Machado Notables in all our PDF Extended History products and printed products wherever possible.

Machado migration to the United States +

Machado Settlers in United States in the 19th Century

Machado Settlers in West Indies in the 19th Century