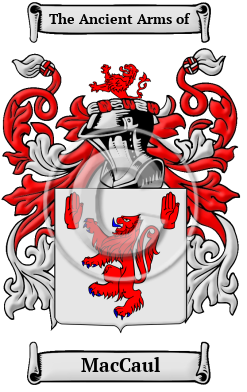 Many variations of the name MacCaul have evolved since the time of its initial creation. In Gaelic it appeared as Mac Amhalghaidh or Mac Amhlaoibh. The former name denotes a son of Auley, while the later denotes a son of Auliffe or a son of Humphrey. They claim descent through the Heremon line of Irish kings. [1]

Early Origins of the MacCaul family

The surname MacCaul was first found in county Westmeath (Irish: An Iarmhí) in the Irish Midlands, province of Leinster, where at one time the area which is now Ballyloughnoe was once called "McGawley's Country." There is another sept named Mac Amhlaoibh in Gaelic which were a branch of the MacGuires and mainly found in County Fermanagh. This branch gave their name to Clanawley. [2]

Early History of the MacCaul family

This web page shows only a small excerpt of our MacCaul research. Another 109 words (8 lines of text) covering the years 1787 and 1841 are included under the topic Early MacCaul History in all our PDF Extended History products and printed products wherever possible.

Names from the Middle Ages demonstrate many spelling variations. This is because the recording scribe or church official often decided as to how a person's name was spelt and in what language. Research into the name MacCaul revealed many variations, including MacAulay, MacAwley, MacAuley, MacAullay, MacAulley, MacAwlay, MacCaulay, MacCawley, MacGawley, Magawley, Cauley, Caulay, McCamley and many more.

Another 34 words (2 lines of text) are included under the topic Early MacCaul Notables in all our PDF Extended History products and printed products wherever possible.

Migration of the MacCaul family

Thousands of Irish families left for North American shores in the 19th century. These people were searching for a life unencumbered with poverty, hunger, and racial discrimination. Many arrived to eventually find such conditions, but many others simply did not arrive: victims of the diseased, overcrowded ships in which they traveled to the New World. Those who lived to see North American shores were instrumental in the development of the growing nations of Canada and the United States. A thorough examination of passenger and immigration lists has disclosed evidence of many early immigrants of the name MacCaul: James MacCauley settled in Charles Town in 1772 with his wife; Kenneth MacAulay settled in Philadelphia in 1774; Alexander, George, Henry, James, John, William MacAuley all arrived in Philadelphia between 1840 and 1860.