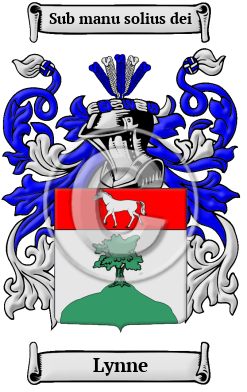 The Lynne surname comes from an Upper German word "lind," which meant "tender" or "gentle hearted." In some instances, especially in Saxony, the surname evolved from the personal name Lindemuth. In general, the similar phonetic name Linde comes from "Linden," which was a type of tree.

Early Origins of the Lynne family

The surname Lynne was first found in Prussia, where this family name became a prominent contributor to the development of the district from ancient times. Always prominent in social affairs, the name became an integral part of that turbulent region as it emerged to form alliances with other families within the Feudal System and the nation. Chronicles first mention Hainrich der Lind in Constance in 1254.

Early History of the Lynne family

Spelling variations of this family name include: Lind, Lynd, Lint, Lynt and others.

Prominent figures of the time who bore the name Lynne were Anton Franz Hermann Lindt, a general in the Saxon army, who was ennobled in 1780. He was born in Frankfurt a.M. but moved with the family to Dresden. In 1784 he became general-inspector of the infantry, and in 1799 General of...
Another 52 words (4 lines of text) are included under the topic Early Lynne Notables in all our PDF Extended History products and printed products wherever possible.

Migration of the Lynne family

Some of the first settlers of this family name or some of its variants were: Johannes VonDer Lindt, who came to Philadelphia in 1749. John Lindt came to New Castle, Delaware in 1849; while Wilhelm Lindt arrived in Philadelphia in 1806. Anna Elisabeth Lind emigrated to Pennsylvania sometime between 1741 and 1767.

Motto: Sub manu solius dei
Motto Translation: Under the hand of the kingdom of God.