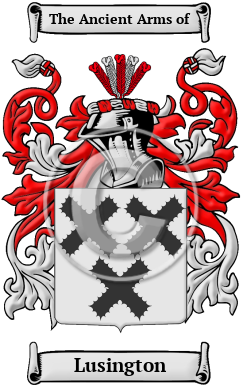 Early Origins of the Lusington family

The surname Lusington was first found in Gloucestershire at Lassington, a parish, in the Lower division of the hundred of Dudstone and King's-Barton. [1] One of the first records of the name was found in Essex where John de Lessington took possession of the manor Theydon in 1248 for 100 marks.

Early History of the Lusington family

This web page shows only a small excerpt of our Lusington research. Another 141 words (10 lines of text) covering the years 1455, 1487, 1510, 1600 and 1153 are included under the topic Early Lusington History in all our PDF Extended History products and printed products wherever possible.

More information is included under the topic Early Lusington Notables in all our PDF Extended History products and printed products wherever possible.

Migration of the Lusington family

In an attempt to escape the chaos experienced in England, many English families boarded overcrowded and diseased ships sailing for the shores of North America and other British colonies. Those families hardy enough, and lucky enough, to make the passage intact were rewarded with land and a social environment less prone to religious and political persecution. Many of these families became important contributors to the young colonies in which they settled. Early immigration and passenger lists have documented some of the first Lusingtons to arrive on North American shores: Thomas and Fanny Lessington and their son and daughter, who arrived in New York on May 8, 1858 aboard the " Isaac Webb" from Liverpool, England..