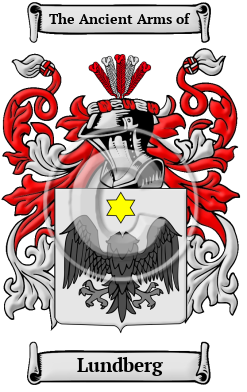 The surname Lundberg actually has Scandinavian roots. This is not unexpected considering that Schleswig-Holstein shares its Northern border with Denmark. The word "lund" was Danish for "copse," and is connected to the Dithmarsch region of Schleswig-Holstein, where there is a town called Lunden. The surname may have originally been used to denote someone who lived in or near a copse of trees or a small wooded area.

Early Origins of the Lundberg family

The surname Lundberg was first found in Northern Germany, where Peter Lundeman was recorded in Rostock in 1257, and Laur. Lundt in Flensberg in 1603. The name contributed greatly to the development of an emerging nation which would later play a large role in the tribal and national conflicts of the area. In later years the name branched into many houses, each playing a significant role in the local social and political affairs.

Early History of the Lundberg family

This web page shows only a small excerpt of our Lundberg research. Another 107 words (8 lines of text) covering the year 1412 is included under the topic Early Lundberg History in all our PDF Extended History products and printed products wherever possible.

More information is included under the topic Early Lundberg Notables in all our PDF Extended History products and printed products wherever possible.

In the United States, the name Lundberg is the 4,087th most popular surname with an estimated 7,461 people with that name. [1]

Lundberg migration to the United States +

Lundberg Settlers in United States in the 19th Century

Lundberg Settlers in United States in the 20th Century