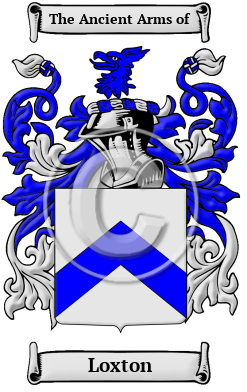 The history of the Loxton family name begins after the Norman Conquest of 1066. They lived in Lockton, which was the name of a chapelry in the parish of Middleton, in North Riding of Yorkshire. The place-name Lockton is derived from the Old English word loc(a), which means enclosure. In Old English, this word took on the additional meaning of a bridge. The second part of the place-name ton is derived from the Old English word tun, which means settlement or village. [1]

Early Origins of the Loxton family

The surname Loxton was first found in the North Riding of Yorkshire at Lockton, a small village and civil parish in the Ryedale district that dates back to the Domesday Book where it was listed as Locheton, part of the King's land and the under-tenant from whom this family name is conjecturally descended remains a mystery but was probably one of the King's favorites. [2]

Early History of the Loxton family

This web page shows only a small excerpt of our Loxton research. Another 109 words (8 lines of text) covering the years 1250 and 1603 are included under the topic Early Loxton History in all our PDF Extended History products and printed products wherever possible.

Anglo-Norman names are characterized by a multitude of spelling variations. When the Normans became the ruling people of England in the 11th century, they introduced a new language into a society where the main languages of Old and later Middle English had no definite spelling rules. These languages were more often spoken than written, so they blended freely with one another. Contributing to this mixing of tongues was the fact that medieval scribes spelled words according to sound, ensuring that a person's name would appear differently in nearly every document in which it was recorded. The name has been spelled Lockton, Lokton, Lockston, Loxton, Loketon, Locktone, Lockten and many more.

More information is included under the topic Early Loxton Notables in all our PDF Extended History products and printed products wherever possible.

Loxton Settlers in Australia in the 19th Century