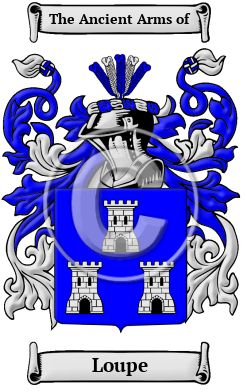 The origins of the Loupe name come from two distinct sources; in some instances, the name came from the animal "wolf," or "loup" in French, while other occurrences of this surname were no doubt derived from the Saint Loup of Troyes in the 5th century, who is said to have stopped Attila.

Early Origins of the Loupe family

The surname Loupe was first found in La Rochelle, a port city, and capital of the former Aunis province of France. Early recorded references to the name include Michel Le Loup who was landlord of Comptes in 1572, his son Yves Le Loup, who was a "conseiller" to the king in 1622, as well as Anne, the daughter of Claude and Francoise Le Loupe, who was christened at Gerbeviller in the department of Meurthe-Et-Moselle in July, 1619.

Early History of the Loupe family

This web page shows only a small excerpt of our Loupe research. Another 48 words (3 lines of text) covering the years 1667 and 1698 are included under the topic Early Loupe History in all our PDF Extended History products and printed products wherever possible.

More information is included under the topic Early Loupe Notables in all our PDF Extended History products and printed products wherever possible.

Loupe migration to the United States +

Loupe Settlers in United States in the 18th Century

Loupe Settlers in Canada in the 18th Century