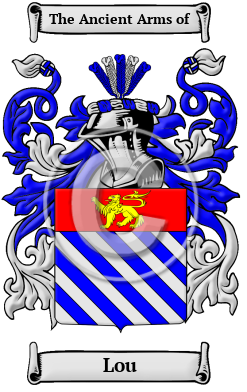 The Lou surname is derived from the Flemish/Dutch word "loo," which refers to a wet, wooded area. The name was most likely originally a topographic name for someone, who lived in such a place. The word "loo" is also a common compound in place names, the most famous of which is Waterloo, in Brabant, Belgium.

Early Origins of the Lou family

The surname Lou was first found in various feudal states of the Middle Ages that today make up Belgium and the Netherlands.

Early History of the Lou family

This web page shows only a small excerpt of our Lou research. Another 47 words (3 lines of text) covering the years 1489, 1614, 1684 and 1745 are included under the topic Early Lou History in all our PDF Extended History products and printed products wherever possible.

Spelling variations of this family name include: Loo, Van Loo, Lou, Van Lou and others.

Another 35 words (2 lines of text) are included under the topic Early Lou Notables in all our PDF Extended History products and printed products wherever possible.

Lou migration to the United States +

Lou Settlers in United States in the 18th Century