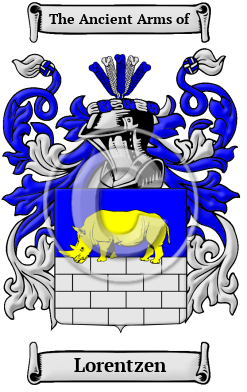 The ancient and distinguished German surname Lorentzen is derived from the personal name "Lorens," the German and Scandinavian variant of "Lawrence," a name of Latin origins denoting a "man from Laurentium." The name Lorentzen indicates "son of Lorens," and was most likely first borne by the son of someone named Lorens.

Early Origins of the Lorentzen family

The surname Lorentzen was first found in Hessen, where the family became noted for its many branches within the region, each house acquiring a status and influence which was envied and enrolled by the princes of the region. The earliest known bearer of the name was Lukas Laurencii, who was a painter in Mähren in 1447. In their later history, the family became a power unto itself and was elevated to the ranks of nobility as it grew in wealth and influence.

Early History of the Lorentzen family

This web page shows only a small excerpt of our Lorentzen research. Another 213 words (15 lines of text) covering the years 1718, 1790, 1807, 1836, 1853, and 1854 are included under the topic Early Lorentzen History in all our PDF Extended History products and printed products wherever possible.

Prominent figures of the time who bore the name Lorentzen were Hendrik Anton Lorentz (1853-1928), who was a Dutch physicist. His theory of the "Lorentz transformation", a restricted theory of relativity pre-dating Einstein, was published in 1903. He won the...
Another 39 words (3 lines of text) are included under the topic Early Lorentzen Notables in all our PDF Extended History products and printed products wherever possible.

In the United States, the name Lorentzen is the 18,119th most popular surname with an estimated 2,487 people with that name. [1]

Lorentzen migration to the United States +

Lorentzen Settlers in United States in the 19th Century

Lorentzen Settlers in Australia in the 19th Century