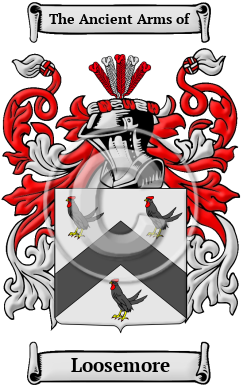 Early Origins of the Loosemore family

The surname Loosemore was first found in Devon, at Loosemoor in the Oakford parish within Witheridge Hundred of Devon. Unfortunately, the place name cannot be found today. [1]

The earliest record on the name was found in the Devon Eyre Roll for AD 1238 where Walter Losmer was listed as capturing Robert de Sicca Villa and imprisoned him for the authorities. Almost one hundred years later, the Lay Subsidy returns for Oakford listed Robertus de Losmore in 1327 and Robertus de Losamor in 1332. [2]

This latter entry was a tax entry as he was one of fifteen men in Oakford tithing assessed for tax, from a population of about 300 or so. Such a listing is significant, as he must have been a person of considerable wealth at the time.

Early History of the Loosemore family

Spelling variations of this family name include: Luxmore, Luxmoore, Luzmore, Loosemoor, Loosemoore, Loosemore and many more.

Distinguished members of the family include John Loosemore (1616-1681), English builder of pipe organs, best known for his organ at Exeter Cathedral in Devon, completed in 1665. He was born in Barnstaple where he was baptized on 25 August 1616. His father was also a builder and repairer of organs, and passed on the trade to his son John, who moved to Exeter sometime before 1645. "In November 1660 he was paid 5l. by the chapter towards 'the making of a sett of pipes to' the temporary organ used in the cathedral...
Another 92 words (7 lines of text) are included under the topic Early Loosemore Notables in all our PDF Extended History products and printed products wherever possible.

Loosemore migration to the United States +

Loosemore Settlers in United States in the 17th Century

Loosemore Settlers in United States in the 19th Century

Loosemore Settlers in United States in the 20th Century

Loosemore Settlers in Australia in the 19th Century