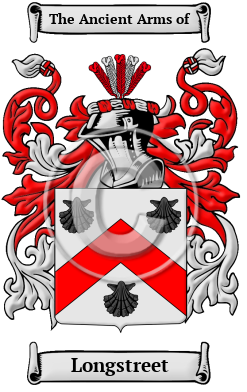 Early Origins of the Longstreet family

The surname Longstreet was first found in Wiltshire where the first record of the family was Walter de Langestret who was listed in the Assize Rolls of Wiltshire in 1249. The name literally means "dweller by the long road from the Old English words "lang" + "straet." [1] Another source claims the name was " 'of the lang strother,' i.e. the long marsh, a North-English and Border name. [2]

Early History of the Longstreet family

This web page shows only a small excerpt of our Longstreet research. Another 92 words (7 lines of text) covering the years 1206, 1448, 1450, 1676 and 1887 are included under the topic Early Longstreet History in all our PDF Extended History products and printed products wherever possible.

Spelling variations of this family name include: Longstreet, Langstreet, Longstreth and others.

Another 32 words (2 lines of text) are included under the topic Early Longstreet Notables in all our PDF Extended History products and printed products wherever possible.

In the United States, the name Longstreet is the 10,881st most popular surname with an estimated 2,487 people with that name. [3]

Longstreet migration to the United States +

Longstreet Settlers in United States in the 19th Century

Longstreet Settlers in Canada in the 18th Century