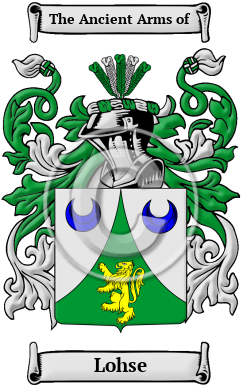 Early Origins of the Lohse family

The surname Lohse was first found in Lueneburg, where the family can be traced as early as 1277. Members of the family gradually migrated throughout Europe, to regions such as Pomerania, where the branch of the family Lozeke von Loysin was recorded in 1313.

Early History of the Lohse family

Another 45 words (3 lines of text) are included under the topic Early Lohse Notables in all our PDF Extended History products and printed products wherever possible.

Lohse migration to the United States +

Lohse Settlers in United States in the 18th Century

Lohse Settlers in United States in the 19th Century