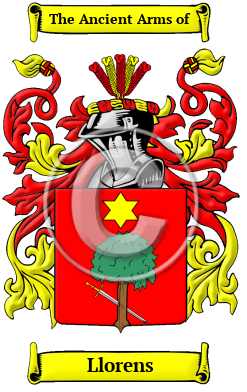 The surname is one of the old patronymic surnames common in the region of Tuscany. Patronymic names are those derived from the father's given name, This system of name-making was widely used because it linked well with the existing Feudal System and during the Christian era, many people named their children after saints and biblical figures. The surname Llorens came from the given name Lorenzo. No doubt some of the popularity of this given name was due to Saint Lorenzo an early Latin church martyr, who died in around 258 A.D.

Early Origins of the Llorens family

The surname Llorens was first found in Florence (Italian: Firenze), originally the capital of Tuscany, then capital of the kingdom of Italy. On the River Arno there are numerous Florentine Churches, Museums, Galleries. It dates back to 313 A.D. The history is complex and turbulent. The de' Medici family are the notables. They were expelled in 1494 but they returned in 1512, out in 1527 and then returned. In those ancient times only persons of rank, the podesta, clergy, city officials, army officers, artists, landowners were entered into the records. To be recorded at this time, at the beginning of recorded history, was of itself a great distinction and indicative of noble ancestry.

Early History of the Llorens family

Prominent among members of the family was Lorenzo di Pietro (circa 1412-1480), Sienese painter, sculptor, and goldsmith, and Lorenzo di Credi (1459-1537), Florentine painter. In later years, Carlo...
Another 28 words (2 lines of text) are included under the topic Early Llorens Notables in all our PDF Extended History products and printed products wherever possible.

Llorens migration to the United States +

Llorens Settlers in United States in the 19th Century