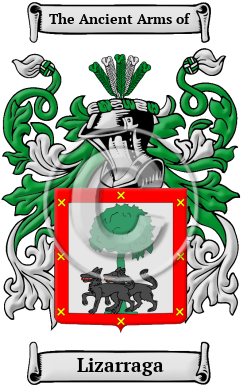 The Spanish name Lizarraga is the surname of an ancient and noble Basque family, whose "casas solares" or ancestral seats were located in the villages of Vergara and Bilbao. The name Lizarraga comes from the Basque word "lexar" meaning "ash tree," and the locative suffix "-alde," meaning "region of." Thus the original bearer of the name was a "dweller near the ash trees."

Early Origins of the Lizarraga family

The surname Lizarraga was first found in the northern provinces of the Basque region, primarily in the villages of Vergara and Bilbao.

Early History of the Lizarraga family

This web page shows only a small excerpt of our Lizarraga research. Another 108 words (8 lines of text) covering the years 1658 and 1676 are included under the topic Early Lizarraga History in all our PDF Extended History products and printed products wherever possible.

Prominent among bearers of the family name at this time was Salvador Lizarralde y Ordóñez de Pineda, who was made the first Marquis of Villa Alegre and Knight of the...
Another 29 words (2 lines of text) are included under the topic Early Lizarraga Notables in all our PDF Extended History products and printed products wherever possible.

In the United States, the name Lizarraga is the 9,426th most popular surname with an estimated 2,487 people with that name. [1]

Lizarraga migration to the United States +

Lizarraga Settlers in United States in the 19th Century

Lizarraga Settlers in United States in the 20th Century