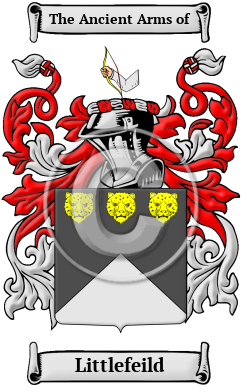 Early Origins of the Littlefeild family

The surname Littlefeild was first found in Staffordshire at Lichfield, a city and county of itself, and the head of a union. "This place, called by Bede Licidfeld, and by Ingulphus and Henry of Huntingdon Lichfeld, both implying "the field of the dead," is supposed to have derived its name from the martyrdom of more than 1000 Christians, who are said to have been massacred here in the reign of the Emperor Diocletian." [1]

Early History of the Littlefeild family

This web page shows only a small excerpt of our Littlefeild research. Another 65 words (5 lines of text) are included under the topic Early Littlefeild History in all our PDF Extended History products and printed products wherever possible.

More information is included under the topic Early Littlefeild Notables in all our PDF Extended History products and printed products wherever possible.

Littlefeild migration to the United States +

Littlefeild Settlers in United States in the 17th Century