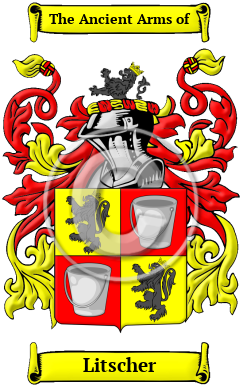 The Litscher surname is thought to have derived from the Slavic word "litsch," which meant "wild;" as such, it may have originally been a nickname for a wild or unruly person. The surname many also have evolved from any of several places, such as Lisch in Holstein; or Lischau in East Prussia.

Early Origins of the Litscher family

The surname Litscher was first found in Austria, where the name became noted for its many branches within the region, each house acquiring a status and influence which was enrolled by the princes of the region. In their later history the family became a power unto themselves and were elevated to the ranks of nobility as they grew into this most influential name.

Early History of the Litscher family

During this period prominent bearers of the name Litscher were Christian Liscow (1701-1760) from Mecklenburg, who was a prominent writer of satires. In 1736 he entered the service...
Another 28 words (2 lines of text) are included under the topic Early Litscher Notables in all our PDF Extended History products and printed products wherever possible.

Migration of the Litscher family

Some of the first settlers of this family name or some of its variants were: Daniel Litschow, who arrived at Long Island in 1662; Anna Barbara Litser, who came to New York in 1710; Jacob Litser, his wife Susanna, and their five children, who arrived in New York in 1710.