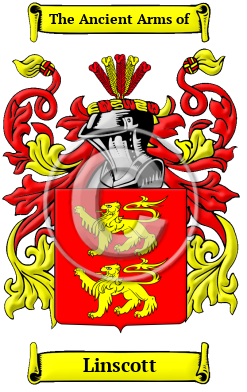 Early Origins of the Linscott family

The surname Linscott was first found in Essex at Lindsell, a village and civil parish in the Uttlesford district. The place name dates back to the Domesday Book of 1086 where it was first listed as Lindesela. [1] Literally, the place name means "dwelling among the lime-trees," having derived from the old English words "lind" + "sele." [2] Historically quite small, in the late 1800s, the population was 393 and at that time was home to a small ancient church named St. Mary the Virgin, Lindsell. Hence, conjecturally, the surname is descended from the tenant of the lands and village of Lindsell, a Norman noble by the name of Ranulph de St.Valery, under tenant to tenant in chief, Eudo the Steward. The Domesday Book lists the village as having a mill and five beehives.

Early History of the Linscott family

This web page shows only a small excerpt of our Linscott research. Another 71 words (5 lines of text) are included under the topic Early Linscott History in all our PDF Extended History products and printed products wherever possible.

More information is included under the topic Early Linscott Notables in all our PDF Extended History products and printed products wherever possible.

In the United States, the name Linscott is the 12,015th most popular surname with an estimated 2,487 people with that name. [3]

Linscott Settlers in Australia in the 19th Century

Linscott Settlers in New Zealand in the 19th Century