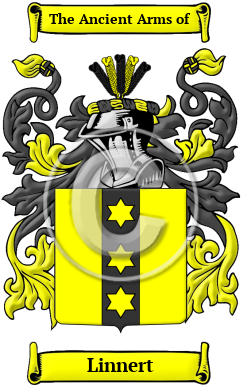 Early Origins of the Linnert family

The surname Linnert was first found in Frankfurt, where the name could be considered to have made a great contribution to the feudal society which became the backbone of modern Europe. The name is a Roman-German mixed compounded of Leo (lion) and "Hard," the mediaeval German word for "brave." St. Leonhardt was the patron saint of farmers and of horses. The name became prominent in local affairs and branched into many houses which played important roles in the savage tribal and national conflicts, in which each group sought power and status in an ever changing territorial profile.

Early History of the Linnert family

Prominent figures of the time who bore the name Linnert were Friedrich Lienhard, who was a prominent Alcasian (Alemannic) poet. Dorette (1756-84) and Auguste (1758-86) Leonhart were sisters...
Another 27 words (2 lines of text) are included under the topic Early Linnert Notables in all our PDF Extended History products and printed products wherever possible.

Linnert migration to the United States +

Linnert Settlers in United States in the 19th Century