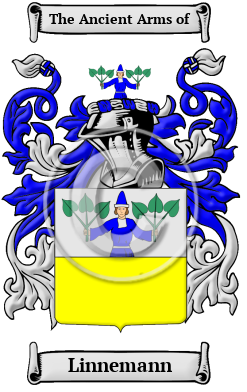 The Linnemann surname is derived from one of several place names Linde, as well from the Linden near Hannover, and was no doubt originally used to describe someone who came from one of these places.

Early Origins of the Linnemann family

The surname Linnemann was first found in the Lower Rhine, where this family became a prominent contributor to the development of the district from ancient times. Chronicles first mention a Hermann Lindeman of Hanover in 1335, Henczel unter der Lynden of Freiberg (Saxony) in 1383, Hannus von der Linde in 1440, Jacob Lindner of Tirol in 1348, and Johann van Lynder of the lower Rhine in 1528.

Early History of the Linnemann family

Spelling variations of this family name include: Lindemann, Lindeman, Lindman, Lindermann and many more.

Notables with the name Linnemann during this period were Michael Lindener (1520-1562), who was a strolling scholar and schoolmaster in Nuremberg, Ulm, and Augsburg, where he was finally executed for murder. Otto zur Linde (1873-1938) was a...
Another 37 words (3 lines of text) are included under the topic Early Linnemann Notables in all our PDF Extended History products and printed products wherever possible.

Linnemann migration to the United States +

Linnemann Settlers in United States in the 19th Century