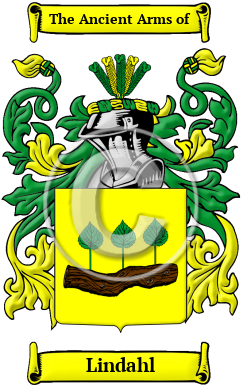 The surname Lindahl is derived from the German word "linde" meaning lime tree. It was a topographic name for someone who lived near a lime tree. There are also several places named for this word, especially in northern Germany, and as such people may have adopted the habitation name as a surname. There are several Swedish compound names, created ornamentally from the root "Lind," they include Lindberg, Lindström, Lindbloom and others.

Spelling variations of this family name include: Lindros and others.

In the United States, the name Lindahl is the 9,540th most popular surname with an estimated 2,487 people with that name. [1]

Lindahl migration to the United States +

Lindahl Settlers in United States in the 19th Century

Historic Events for the Lindahl family +