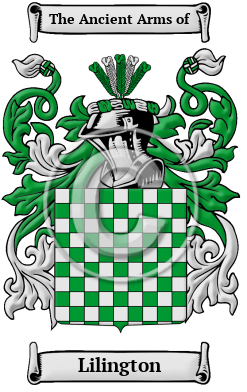 Early Origins of the Lilington family

The surname Lilington was first found in Dorset at Lillington, a hamlet and civil parish that dates back to 1166 when it was first listed as Lilletone. Literally the place name meant "estate associated with a man called Lylla," having derived from the Old Englinsh personal name + "-ing" + "tun." [1] The small parish church which dates back to the 13th century is of note as Sir Walter Raleigh's second son, Carew, was christened here in 1605. Lillington is also a parish in the union of Warwick, Kenilworth division of the hundred of Knightlow and now part of the town of Leamington Spa. However, as far as the surname is concerned, the first record of the name was found in the year 1198 when Geoffrey de Lillington held estates in Oxfordshire.

Early History of the Lilington family

More information is included under the topic Early Lilington Notables in all our PDF Extended History products and printed products wherever possible.

Migration of the Lilington family