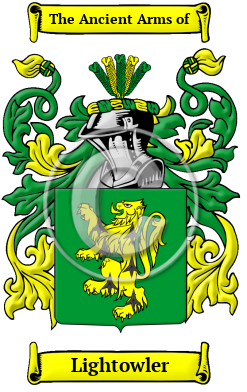 Early Origins of the Lightowler family

The surname Lightowler was first found in Lancashire at Lightollers, an estate in the parish of Stockport. [1] One source presumes the Old English name was derived from "dweller by the light alders." [2]

A very rare surname, the first record was that of Michael de Lightholres who was recorded here in the 13th century. [3]

Early History of the Lightowler family

This web page shows only a small excerpt of our Lightowler research. Another 77 words (6 lines of text) covering the years 1621, 1624 and 1631 are included under the topic Early Lightowler History in all our PDF Extended History products and printed products wherever possible.

More information is included under the topic Early Lightowler Notables in all our PDF Extended History products and printed products wherever possible.

Lightowler migration to the United States +

Lightowler Settlers in United States in the 19th Century

Lightowler Settlers in United States in the 20th Century

Lightowler Settlers in Australia in the 19th Century