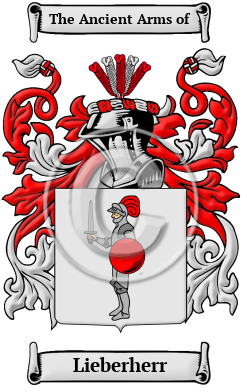 The Lieberherr family finds its ancestral home that ancient basin that fed the Elbe, Rhine, Wesser, and Danube rivers. In that area, Lieberherr evolved as a German nickname for a person known "of a pleasant disposition."

Early Origins of the Lieberherr family

The surname Lieberherr was first found in Pomerania, where the name was anciently associated with the tribal conflicts of the area. The original, literal meaning of "Liebermann" was "one of pleasant disposition," but later came to represent many different branches of a powerful family. They declared allegiances to many nobles and princes of early history, lending their influence in struggles for power and status within the region. They branched into many houses, and their contributions were sought by many leaders in their search for power.

Early History of the Lieberherr family

This web page shows only a small excerpt of our Lieberherr research. Another 130 words (9 lines of text) covering the years 1790, 1803, 1791 and 1840 are included under the topic Early Lieberherr History in all our PDF Extended History products and printed products wherever possible.

Prominent bearers of the name Lieberherr at this time were Georg Matthias von Liebermann (18th century), of the von Sonnenberg line, who became first lieutenant in the Austrian army and Lord of Wettschuetz. His...
Another 34 words (2 lines of text) are included under the topic Early Lieberherr Notables in all our PDF Extended History products and printed products wherever possible.

Migration of the Lieberherr family