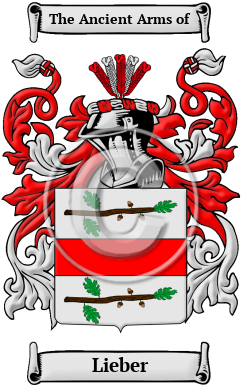 The prestigious surname Lieber comes from the ancient Jewish culture. This surname is a nickname surname, which comes from the broad category of hereditary surnames. In the Middle Ages, it became necessary to adopt a second name, or surname, because people were moving closer together in towns and cities, and it was becoming difficult to identify people with the same first names. The surname Lieber is a nickname, which comes from the Yiddish word lib, which means dear or beloved. It was generally given to someone who was amiable.

In the United States, the name Lieber is the 15,439th most popular surname with an estimated 2,487 people with that name. [1]

Lieber migration to the United States +

Lieber Settlers in United States in the 18th Century

Lieber Settlers in United States in the 19th Century