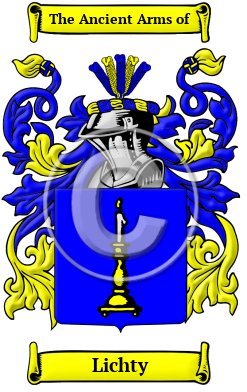 Early Origins of the Lichty family

The surname Lichty was first found in various regions of Germany and the surrounding areas of Switzerland, Austria, France, and Belgium. The many possible origins of the name Lichty make it likely that several branches of the family emerged independently in different areas. The written history of the name Lichty dates back to 1275, when Egelolfus and Berhta dicti zem Liehte of Solothurn, Switzerland were recorded in the "Mittlehochdeutsches Namenbuch." The many branches of the young Lichty family were instrumental during this early period, each contributing greatly to the development of the medieval society of its particular region.

Early History of the Lichty family

Spelling variations of this family name include: Licht, Lichte, Likht, Liehte, Leicht and others.

Another 35 words (2 lines of text) are included under the topic Early Lichty Notables in all our PDF Extended History products and printed products wherever possible.

Lichty migration to the United States +

Lichty Settlers in United States in the 19th Century