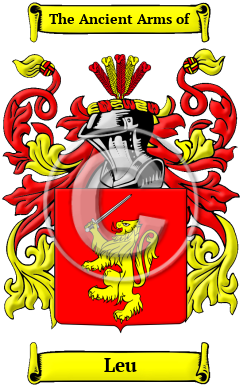 The origin of the proud surname Leu can be traced to the historic kingdom of Bohemia, which is now part of Czechoslovakia. German surnames developed at a time when most of Bohemia, and most of the German provinces, were states of the Holy Roman Empire. At first people used only a single name, but as the population grew and people began to travel, they began to find it necessary to take on an additional name to differentiate themselves. The distinguished surname Leu is derived from the Middle High German "lewe," meaning "lion."

Early Origins of the Leu family

The surname Leu was first found in Bohemia, where the Leu family became a prominent contributor to the development of the district from ancient times. Always prominent in social affairs, the family became an integral part of that turbulent region as it emerged to form alliances with other families within the Feudal System and the nation. One of the earliest recorded Bohemian bearers of the name was Hensel Lebel, who lived in Budweis in 1387.

Early History of the Leu family

During this early period, notable bearers of the name Leu included Leon Loewe von Rozmital (around 1465), whose famous descriptions of the Holy Land through which he traveled were translated into many languages, his daughter became the Queen of Bohemia; Hans Leu, The Elder...
Another 44 words (3 lines of text) are included under the topic Early Leu Notables in all our PDF Extended History products and printed products wherever possible.

Leu migration to the United States +

Leu Settlers in United States in the 18th Century

Leu Settlers in United States in the 19th Century