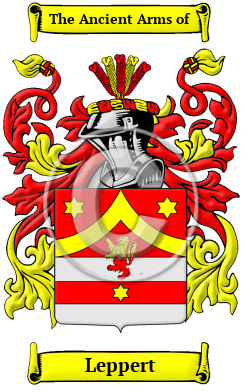 The German state of Bavaria is the ancestral home of the Leppert family. Nickname surnames, such as Leppert, were derived from an eke-name, or added name. They usually reflected the physical characteristics or attributes of the first person that used the name. The family name Leppert is a name for a person who is considered holy or intelligent. It stems from a Old German word "Liutberht," meaning "most brilliant or holy, of the people." The endings "-bert," "-bricht," "-pert," "-ke" and "-brecht" are interchangeable in medieval names, depending on the region.

Early Origins of the Leppert family

The surname Leppert was first found in Bavaria, where the ancestors of the bearers of this family name lived from ancient times. The name derives from the older Leiprecht and Leuprecht, which themselves derived from the Old-German word "Liutberht," meaning "shining" or "holy" people. St. Luitpert was a patron saint of farmers in Swabia. The German name endings "-bert," "-bricht," "-pert," "-ke" and "-brecht" were interchangeable in mediaeval names, depending on the region. The first recorded mention found was of Hans Lueprecht of Leutkirch in 1345.

Early History of the Leppert family

This web page shows only a small excerpt of our Leppert research. Another 86 words (6 lines of text) covering the years 1706 and 1745 are included under the topic Early Leppert History in all our PDF Extended History products and printed products wherever possible.

Many cultural groups lived in the German states in medieval times. Each had its own dialect and traditions, and unique variations of popular names. Low German, which is similar to contemporary Dutch, was spoken in Westphalia. German names are characterized by additions such as regional suffixes and phrases that tell something about the origin or background of its original bearer. Further contributing to the variation in German names was the fact that there were no spelling rules in medieval times: scribes recorded names according to their sound. The recorded spelling variations of Leppert include Lippert, Lipert, Lipard, Lippard, Lipperts, Liperts, Leuprecht, Leiprecht, Leibert, Leubert, Lueprecht, Lueprecht, Luprecht, Leubrecht, Leibrecht, Luebrecht, Lubrecht, Lubricht, Lubert and many more.

More information is included under the topic Early Leppert Notables in all our PDF Extended History products and printed products wherever possible.

In the United States, the name Leppert is the 10,471st most popular surname with an estimated 2,487 people with that name. [1]

Leppert migration to the United States +

Thousands of German settlers came to North America between the mid-17th and mid-20th centuries. The hardships of the long voyage were balanced by the opportunity to escape poverty and religious persecution. The descendents of these settlers still populate the states of Pennsylvania, Texas, New York, Illinois, and California. Many also live in Ontario and the prairie provinces of Canada. An inquiry into the early roots of North American families has revealed a number of immigrants bearing the name Leppert or a variant listed above:

Leppert Settlers in United States in the 18th Century

Leppert Settlers in United States in the 19th Century